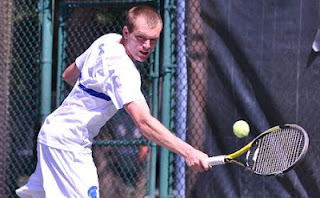 Congratulations to Sean Carr who helped Case Western defeat #13 Carnegie Mellon to finish 3rd at the UAA Conference Tournament.  Sean defeated the #11 player in the country 7-6 in the 3rd.  Sean also won in doubles with Richard Brunsting in the team's semifinal loss to #2 Emory, defeating Ian Wagner / Elliot Kahler.
The team is looking to earn it's first trip to the NCAA Championships.  At large selections will be announced Monday May 7th.  More info on the team's match with Carnegie Mellon is here.